A little nonsense every now and then is relished by the wisest of men. – Willie Wonka

It was a wild and wooly Willy Wonka Friday afternoon, July 14th at Copperfield Bowl as the Houston Apartment Association hosted the sold out 2017 HAA Wonka-Bowl Bowling Tournament. It was a fabulous opportunity for team building among the apartment industry and an opportunity to participate in community outreach. The venue was packed with over 200 bowlers adorned in their finest wonka-wear. The Oompa Loompas and Willy Wonkas were joined by a robust and rowdy crowd of apartment industry friends.

The Better World Wonka Visions were also transporting their latest upgrade to Wonka Vision: the Accelerating Plasmatic Anti-Relativistic Thermo-Molecular Electro-Nano Transporter made from scientifically repurposed apartment parts including a dishwasher, disposal, washing machine, a/c control, closet brackets, ice maker, discarded lamps and left over plumbing parts. Revered in the lab by the Oompas Loompas, and known to them as simply The APARTMENT. The upgrade was a huge hit with massive photo bombing. Look for Mark Heibert’s professional shots on the HAAOnline.org main page.

Willie Wonka whispered his formula: “Invention is 93% perspiration, 6% electricity, 4% evaporation and 20% butterscotch ripple.” Better World Properties agrees it’s a similar ratio of success in the apartment business. It takes a dedicated team to consistently put in 93% perspiration 100% of the time.

It was a night filled with relaxing fun and laugh-so-hard-you-cry moments as fully-attired Oompa Loompas attempted to master blow-out-fives, baby splits and avoidance of the dreaded gutter ball.

Thanks so much to Better World Wonka Visions sponsors: 2M Design, Regent General Contractors, Texscape Landscaping, and Apartment Data Services for their great ideas and support.

Willie Wonka wisely said: “If you want to view paradise, simply look around and view it.” 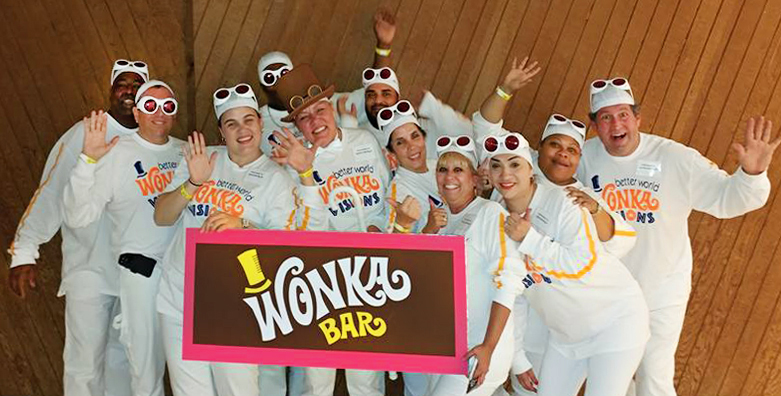 With that in mind, have fun each day, smile and be kind to each other. Won’t you join us in making it a Better World?